The glossary should contain all terminology found on this website. If you find any terms that are not listed here, please let me know via email.

Aggregate ray: A series of small rays found so close together that they appear to be one very large ray. Aggregate rays are frequently found in red alder. 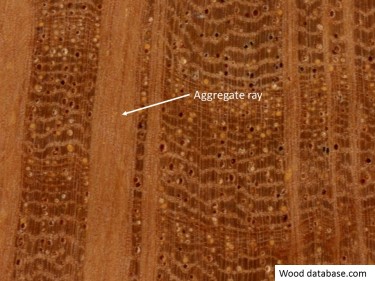 Bear Scratches: An abnormality which is seen on the tangential face of wood that looks like a scratch from a bears claw . It is due to the presence of indented growth rings. They are commonly found in Sitka spruce

Dimples: A growth ring abnormality which lead to small indentations in the tangential surface. Found frequently in Lodgepole and ponderosa pine.Top

Earlywood: Wood that forms in the earlier portion of the growing season. It is frequently lighter in color and less dense than latewood. This is primarily due to the cells of earlywood being larger in size and having thinner cell walls. In ring porous and semi ring porous hardwoods, the vessel elements are typically larger in the earlywood than in the latewood.

Figure: Any abnormality in wood that leads to a distinct grain pattern or wood coloration from what is usually observed for that species.Top

Birds-eye figure: A characteristic swirling pattern in the grain of sugar maple that leads to the formation of small circular figures on the tangential face. Birds-eye is found very infrequently in sugar maple but even less often in other maple species. However, it can lead to a significant increase in the value of the lumber or boards or logs which do not have it.

Blister figure: A figure found frequently in bigleaf maple and infrequently in other maples that gives the wood grain the appearance of round “blister-like” protrusions or depressed areas.

Curly figure: A figure found frequently in red maple but can also be found  in other maples, birches, and black walnut. It occurs when a species that usually has a straight grain instead has a grain that is wavy. 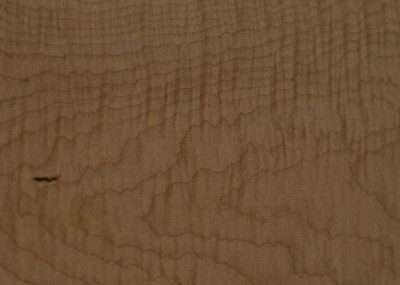 Fusiform ray: A ray that also contains a resin canal. It will appear much wider than normal rays. They are only found in softwoods.

Flame tract: A pattern of white tissue on the cross sectional area of wood that look somewhat like flames. Latewood pores are sometimes found in flame tracts of certain species. 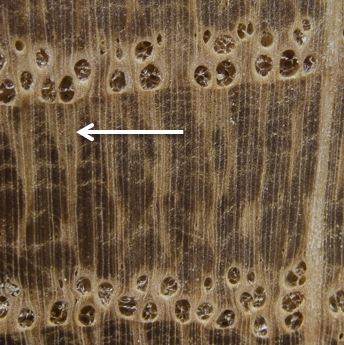 Grain: A term that can mean many things. In the context of this website it refers to a) the general arrangement of wood fibers (see straight grain, spiral grain, interlocked grain) and b) the contrast between earlywood and latewood cells on the tangential and/or radial face.( see even grain, intermediate grain, coarse grain)Top

Interlocked grain: A wood grain that alternates repeatedly from the left and the right of longitudinal. Wood that has an interlocked grain are very difficult to split.

Spiral grain: Grain which deviates from longitudinal orientation. Grain arranged either to the left or right of longitudinal.

Straight grain: Wood grain whereby the cells are arranged longitudinally in the tree.

Even grained: Wood grain whereby there is little contrast on the tangential or radial face between earlywood and latewood. The wood appears to have a fairly consistent, single color to it.

Intermediate grain: Wood grain whereby the contrast between earlywood and latewood is intermediate to even grain and uneven grained wood.

Uneven-grained: Wood grain whereby there is significant contrast on the tangential or radial face between the earlywood and latewood. 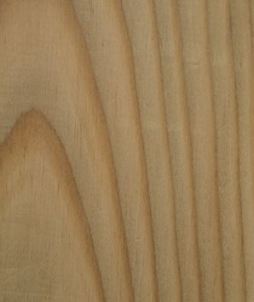 Hardness: A measurement of wood closely related to specific gravity. Typically, the higher the specific gravity, the greater the hardness of wood. Hardness is most accurately determined using the Janka hardness test in a laboratory. It can be estimated however using the fingernail scratch test. The more difficult it is to scratch a piece of wood with a fingernail, the greater its hardness, and thus specific gravity. This simple test is sometimes sufficient for separating out otherwise similar species.Top

Heartwood: The non-living, non-conducting center of a tree. Heartwood was formally sapwood. In some species, the heartwood changes color and becomes darker after the cells die due to the presence of extractives in the wood. In other species, there may be no visible difference in color between heartwood and sapwood. 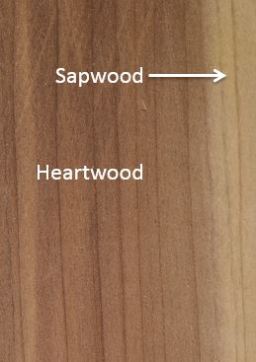 Indented ring: A growth ring that appears V-shaped on the tangential face due to a depression in the annual growth increment.Top

Latewood: Wood which forms in the later portion of the growing season. Latewood cells tend to be smaller in diameter and have a thicker cell walls, thus giving the latewood a darker color and higher specific gravity than earlywood.

Latewood transition:  A reference to how quickly earlywood cells change to latewood cells. The transition can be described as gradual, medium, or abrupt.

Luster: The appearance of light reflectance from wood.Top

Noded ray: A ray that swells where it bisects a growth ring. 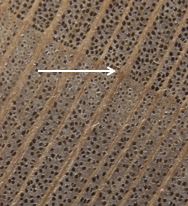 Parenchyma arrangement: The way in which longitudinal parenchyma cells are arranged in cross section.Top

Aliform: Similar to vasicentric parenchyma arrangement but with wing-like extensions of parenchyma on two sides of the pore.

Apotracheal: Parenchyma which does not touch the vessel elements or pores in hardwood species.

Banded: Thin lines of parenchyma which extend between pores.

Confluent: Parenchyma which forms a thick, many cells wide, band which extends between two or more pores.

Diffuse: Apotracheal parenchyma that occur singularly in cross section and therefore they are not visible without a microscope.

Diffuse in aggregate: Apotracheal parenchyma which occur in groups, usually as short lines between rays.

Marginal: Parenchyma which occurs along the growth ring. In many instances, it appears as a thin white line.

Vasicentric: Parenchyma which encircles a pore. 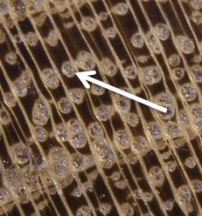 Pore: A vessel element in cross section appearing as a circular void. They range from nearly invisible to the unaided eye to quite wide.

Pore arrangement: The way in which pores are arranged in regard to each other.
Top

Chain multiple: Similar to radial multiple except a greater number of pores. 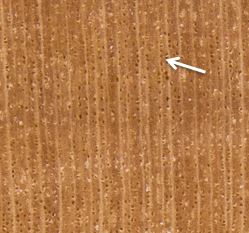 Pore Cluster: A group of pores occurring together in a nested arrangement. 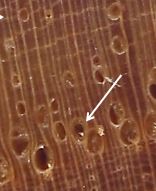 Radial multiple: Two to several pores found together in a linear arrangement.

Ulmiform: Wavy bands of latewood pores usually with white tissue between the pores. Found in elm species (Ulmus.) and hackberry.

Pore distribution: The way in which the pores are arranged according to size within a growth ring.
Top

Diffuse porous: Wood whereby the earlywood and latewood pores are all relatively the same size.

Ring porous: Wood whereby the earlywood pores are significantly larger than the latewood pores. The change in size from large to small pores is very abrupt.

Semi-ring porous: Wood whereby the pore size gradual changes from relatively large in the earlywood to small in the latewood.

Ray: Horizontally arranged parenchyma cells used in the conduction of sap. They appear as white lines in cross section extending from the pith outward to the cambium.

Bi-serrate ray: A ray that is two cells wide. Sometimes visible to the unaided eye.

Uniserrate ray: A ray that is one cell wide. Rarely visible to the unaided eye.

Ray fleck: The ray as seen on the radial or tangential wood face. 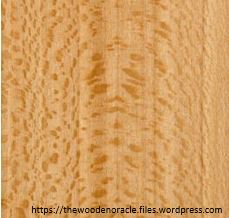 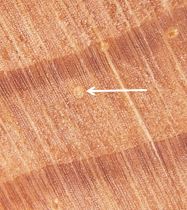 Resin pocket: Resin as it appears on the tangential or radial face of wood from certain conifers.

Sapwood: The living, conducting wood found within a stem. It is lighter in color than the heartwood in those species where there is a difference in color.

Specific gravity (SG): The ration between the weight of the wood to an equal volume of water. Wood with a SG 1.0 will sink.Top

Texture: Relative size of tracheid cells in softwoods or pores in hardwoods.Top

Tracheids: Cells responsible for conduction and support in trees. They are the most common cell in softwoods but are relatively uncommon in hardwoods. They tend to be relatively short with a hollow center and appear to be pinched on either end. When cut on the cross sectional face, they may appear as hollow openings, especially in course textured woods. Materials move from tracheid to tracheid though pits in the side wall. The pits are only visible with a microscope. 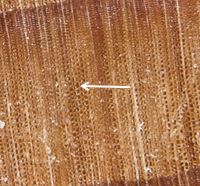 Top
Traumatic resin canal: Resin canals that form after injury. They may be found is species that don’t typically have normal resin canals.Top

Tyloses: Parenchyma outgrowths that plug vessel elements in some species.Top

Vessel element: Straw-like structures which are responsible for the upward movement of fluids and nutrients in hardwood species. They extend from the roots up into the branches. They appear as small openings on the cross section and are also referred to as pores.

Vessel scratch: A large vessel element as it appears longitudinally on the tangential or radial face. A vessel scratch can be visualized as a straw that has been cut in half length-wise. 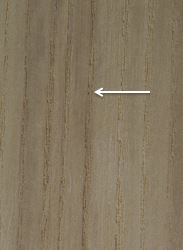